Bumblebees are probably the best known of our wild bees. They differ from most wild bee species in that they are social. This means that they do not live alone (solitary), but in community – in the bumblebee colony.

The genus of bumblebees (Bombus) belongs to the family of true bees (Apidae), which belong to the order of Hymenoptera.

As with all insects, the bumblebee body consists of three sections: head, trunk (thorax) and abdomen. Besides two antennae on the head (the ‘nose’ – with which they can smell very well), bumblebees have two large compound eyes and three dot eyes on the ‘forehead’. Two pairs of membranous wings and three pairs of legs attach to the trunk. The abdomen consists of six segments (tergites) in females and seven in males. The body of a bumblebee is densely hairy – with a magnifying glass you can see that the hairs are pinnate – an adaptation found in all bees that makes them especially good at collecting pollen.

Bumblebees are relatively large and chubby bees and usually colorful, with yellow, orange or red banding or a colored abdomen. But beware: there are often color variations within a species – so identifying the different species is not always easy!

They have a tongue (proboscis) for feeding to reach the nectar hidden in the flower tubes – it can vary greatly in length depending on the species.

Bumblebees also have a stinger and a venom blister – so they can sting. The sting is similarly painful as a bee sting. Unlike honeybees, bumblebees can even sting several times, their sting has no barbs and so, unlike a honeybee sting, does not get stuck in the human skin.

But bumblebees are very peaceful and sting only when massively harassed – male bumblebees (drones) have no sting. Bumblebees are chubbier and furier than honeybees and wasps, which are smaller and slimmer. Bees and wasps are not always easy to distinguish, but wasps do not have feathery hairs because they feed their brood carnivorously (are carnivores) and do not collect pollen.

Attention: some hoverflies are deceptively similar to bumblebees at first sight. However, they belong to the suborder of flies (Brachycera), which belong to the order of bipeds (Diptera) and, as the name suggests, have only one pair of wings. A well-known example is the bumblebee hoverfly.

Life cycle of a bumblebee colony

A bumblebee colony is founded by a single bumblebee queen in spring. She has spent the winter alone in a sheltered place. After finding a suitable nesting site, e.g. an abandoned mouse nest or a sheltered spot in dense vegetation, she collects nectar and pollen, which she stores in the nest in storage pots she has built herself (from wax). 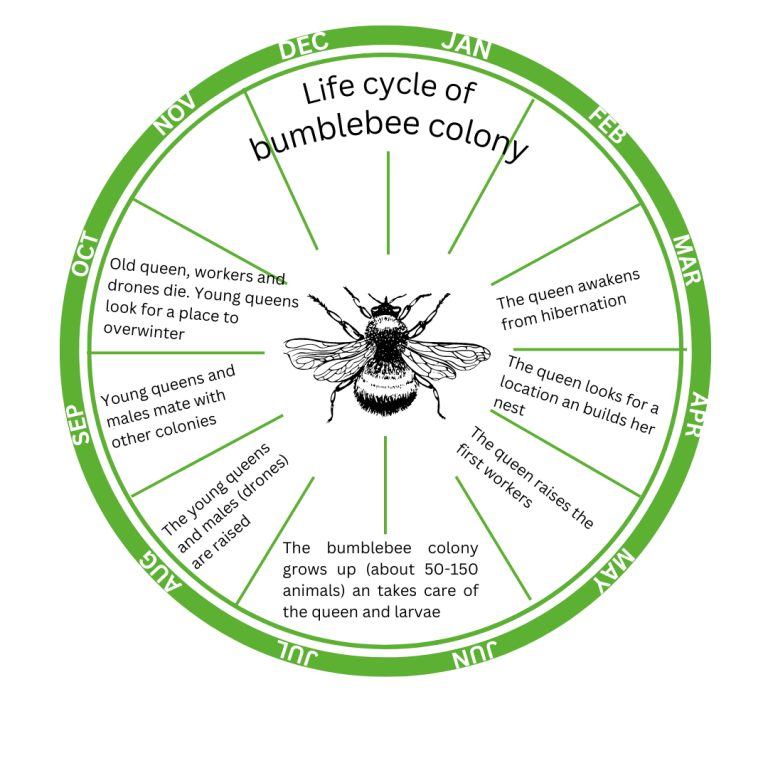 The first eggs (6-12 eggs, protected in a wax shell) are incubated, i.e.
incubated, i.e. warmed by the queen, and so – even if there is still ground frost – her daughters, the first workers of the bumblebee colony, hatch after only about three weeks. The workers themselves will never have daughters of their own and will put all their labor power at the service of the colony during their short lifetime, about 3-4 weeks.

The queen now only lays eggs and the workers take over all tasks. They take care of the brood, keep the nest clean, warm and well ventilated, defend it against intruders and collect food (pollen and nectar), which they feed to the brood and store in the nest. Among other things, the pollen provides necessary protein, nectar the sugar.

Nectar serves not only as food, but also as a source of energy for the colony throughout its development. Bumblebees must always keep their brood very warm (around thirty degrees!) for their optimal development. For this they need nectar as “fuel”. They also need the sugar from nectar to have enough energy for foraging – bumblebees seek out flowers up to a kilometer away from their nest. On cool days, bumblebees can “heat up” before flights – this allows them to be on the move at times of year and in regions that are far too cold for honeybees.

Since bumblebees are tied to their nests (this is where they raise their brood), their flight radius is limited. They must therefore find a sufficient and continuous supply of flowers within a radius of five hundred to one thousand meters around their nest from March to October to provide their colony – between forty and four hundred individuals – with food and warmth.

The bumblebee colony thus grows in the course of a summer from a few animals to, depending on the species, several hundred animals. Only when a colony has brought in a certain amount of nectar and pollen and has thus grown to a good size can it produce offspring: The queen now lays eggs, from which male bumblebees (drones) and young queens hatch rather than workers. These soon leave the nest and mate with drones and young queens from other nests.

The production of drones and young queens ends a successful year for the bumblebee colony. The old queen, the drones and the remaining workers die in the fall; only the young queens survive. They now look for a good place to overwinter – in the soil or in dense plant material.

The new bumblebee year begins when the first early bloomers provide nectar and pollen after winter and the young queens come out of the ground to establish their own colony.

Like all wild bees, bumblebees feed purely vegan, on pollen and nectar – which they collect from flowering plants. They collect from a wide range of different plant species and thus play an important role in plant pollination. Many plant species are pollinated by only one wild bee species that specializes in them. If this wild bee species dies out, the plant species also dies out – and vice versa. Many bumblebee species are of elementary importance for the ecosystem in which they occur, as they exert a great influence on the biodiversity of their biocoenosis.

Bumblebees are of particular importance for pollination not only for many wild plants, but also in agriculture – for example, they play an important role in greenhouse production of tomatoes. Bees & Trees is a non-profit foundation of the Rosslenbroich family. Donations, endowments and active help are welcome.